recomended documentary
Regardless Of Class – Is Singapore still based on equality?
by Janil Puthucheary, the chairman of OnePeople.sg (Central Singapore Joint Social Service Centre)

1826 – Singapore, Malacca and Penang become British colony of the Straits Settlements ( which were a group of British territories located in Southeast Asia) with Singapore as its capital.

1965 – Singapore becomes an independent republic and joins the United Nations. 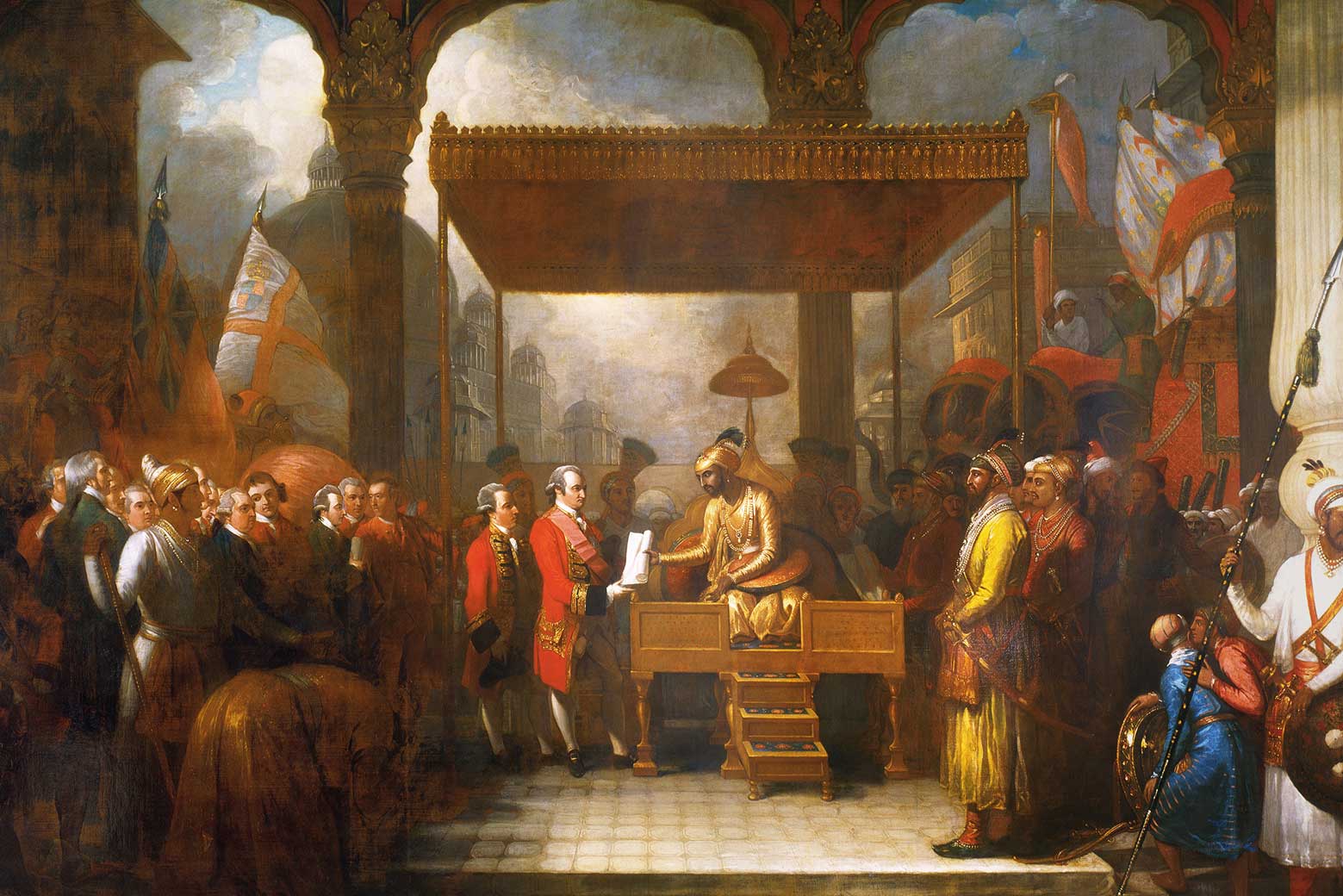 1998 – Singapore slips into recession for the first time in 13 years during Asian financial crisis.

2009 – Singapore appears to emerge from its worst recession on record. 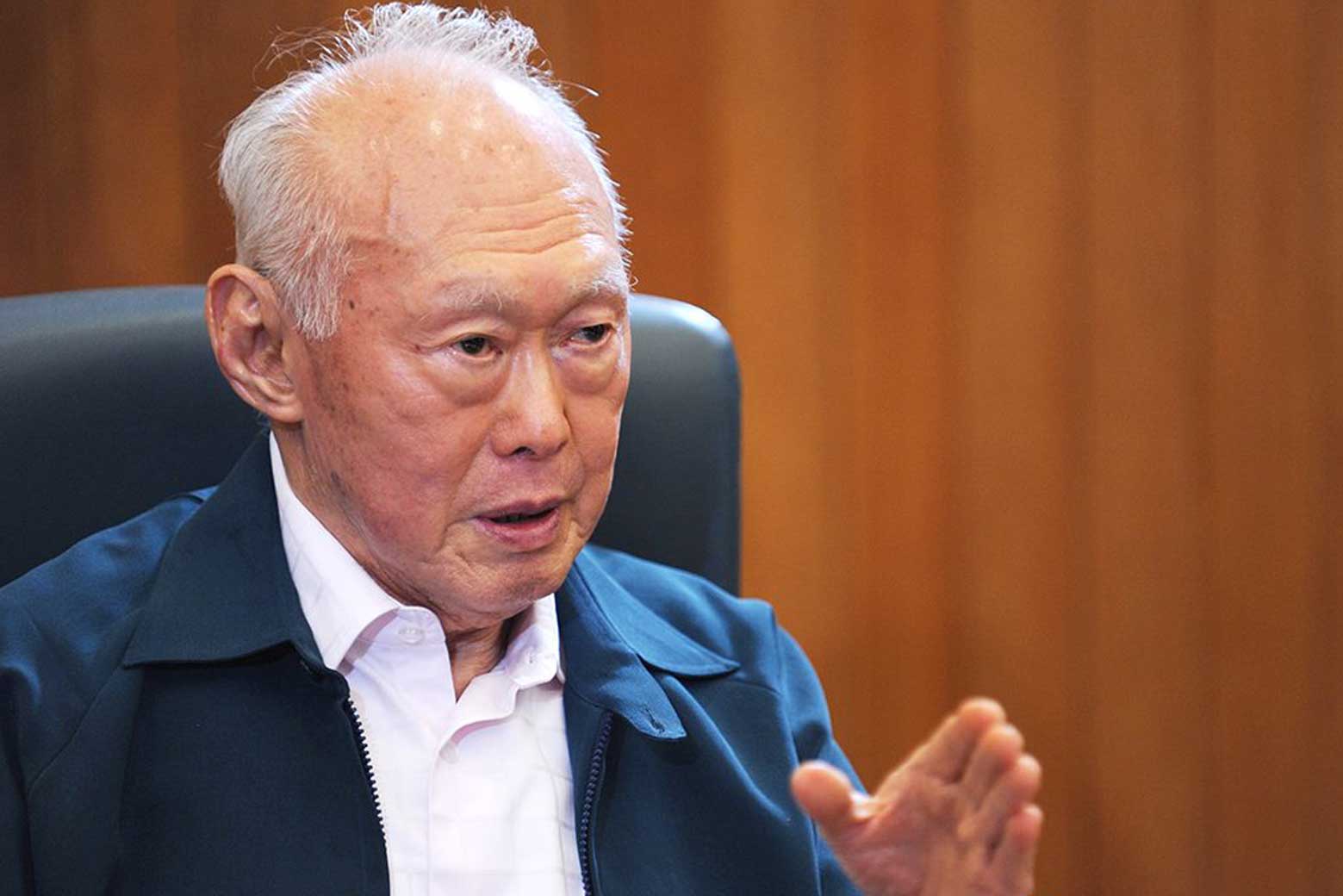 Income
Singapore is among one of the most unequal countries in the world with 73 percent of Singapore’s wealth being owned by the top 20 percent of income-earning households, according to the Credit Suisse Bank.

Admittedly,Singapore follows a progressive resident tax rate starting at 0% and ending at 22%, so the wealthiest people are not taxed accordingly. The corporate tax rate in the country is 17% of all chargeable income earned by a company.

The overwhelming general consensus regarding Singapore is that the country is not only a tax haven, but also one of the world’s most prominent one. 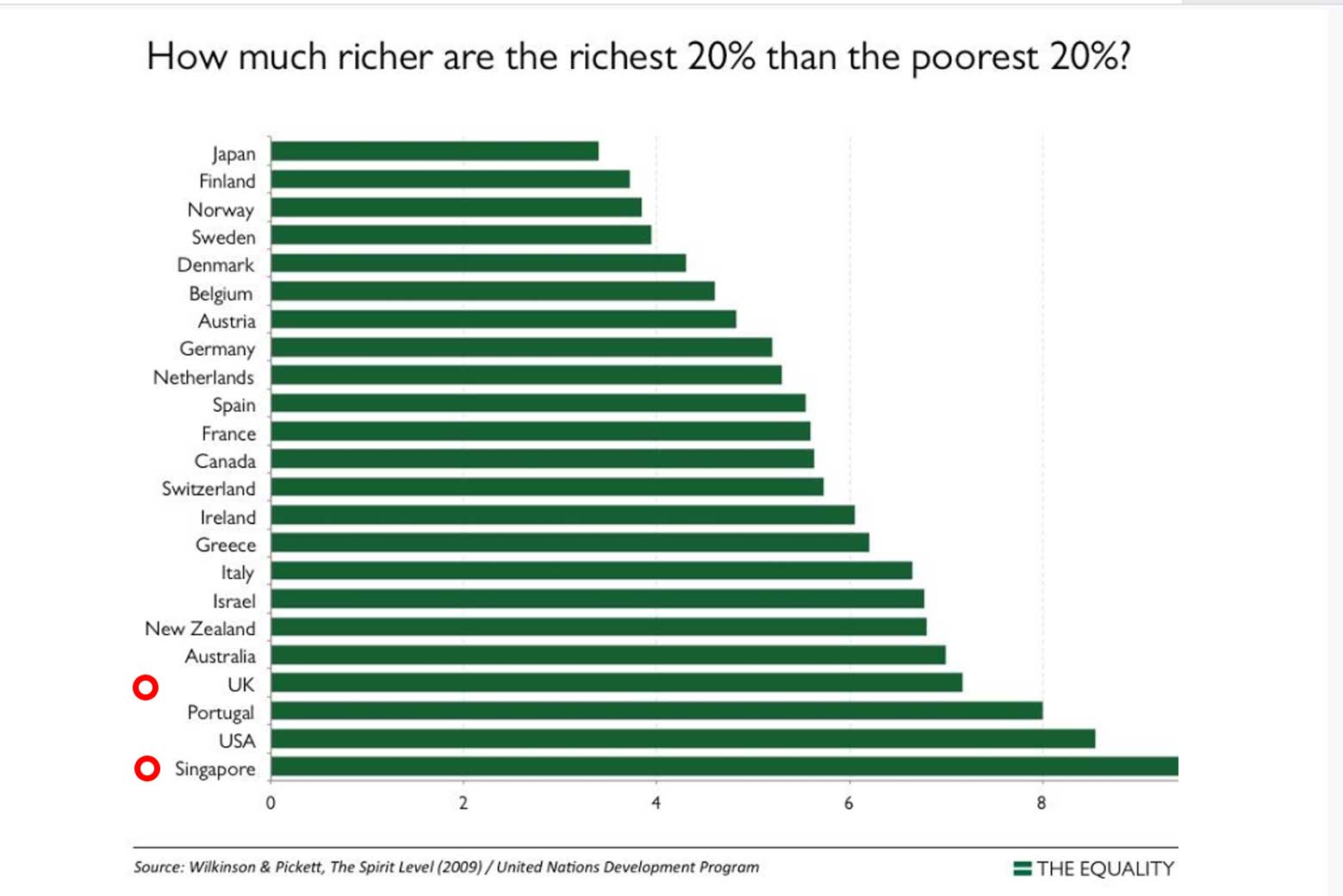 Social welfare
The first thing to know about Singapore’s welfare system is that qualifying for welfare is notoriously difficult by the standards of most of the developed Western world.

The Singapore government’s economic philosophy is based on self-reliance and self-responsibility which means that the first lines of welfare should be derived from one’s individual savings, the family unit, and local communities before turning to the government. The state, in other words, should not act as a guarantor of means but merely a guardian of final recourse. 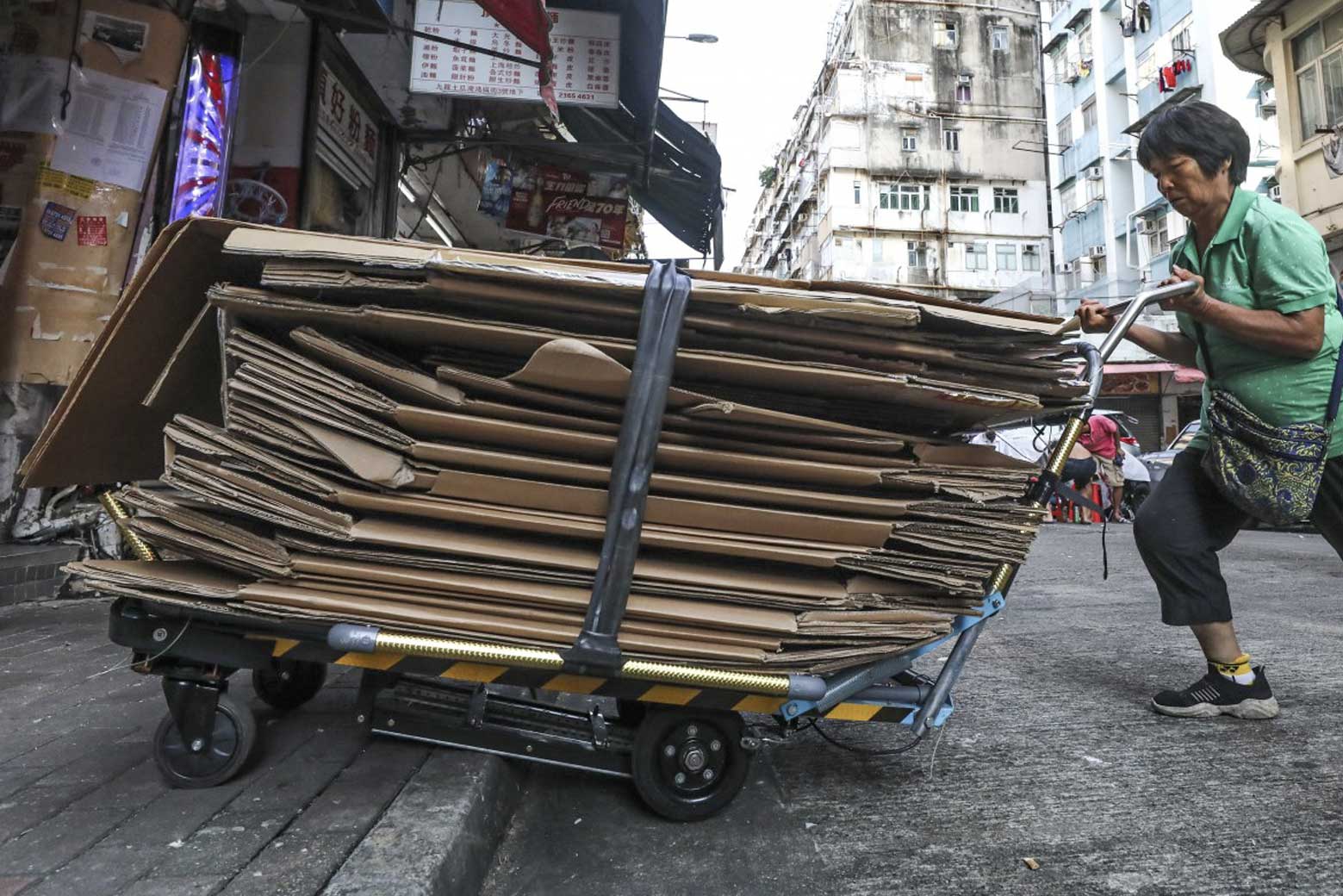 Housing
A push to build public housing began under the British in 1920. But the real change came in 1959 when the People’s Action Party (PAP) took power.  In 1960, the Housing Development Board (HDB) was established and within three years had built more than 31,000 flats. Hundreds of thousands of people were moved from kampongs (traditional villages of zinc-roofed wooden houses that often had no running water or electricity) into HDB flats.

HDBs were initially available only to rent, but home ownership soon became a national priority. In 1960 just 9% of Singaporeans lived in public housing; today that figure is nearly 80%, with more than 90% of residents owning their homes.

Sale prices for new builds (Build-To-Order) are lower than market value – although there is a waiting period of at least 3 to 4 years before you can move in – and rental stock is heavily subsidised for low income households.

Each HDB has to meet very strict ethnic quotas as well as other criteria. 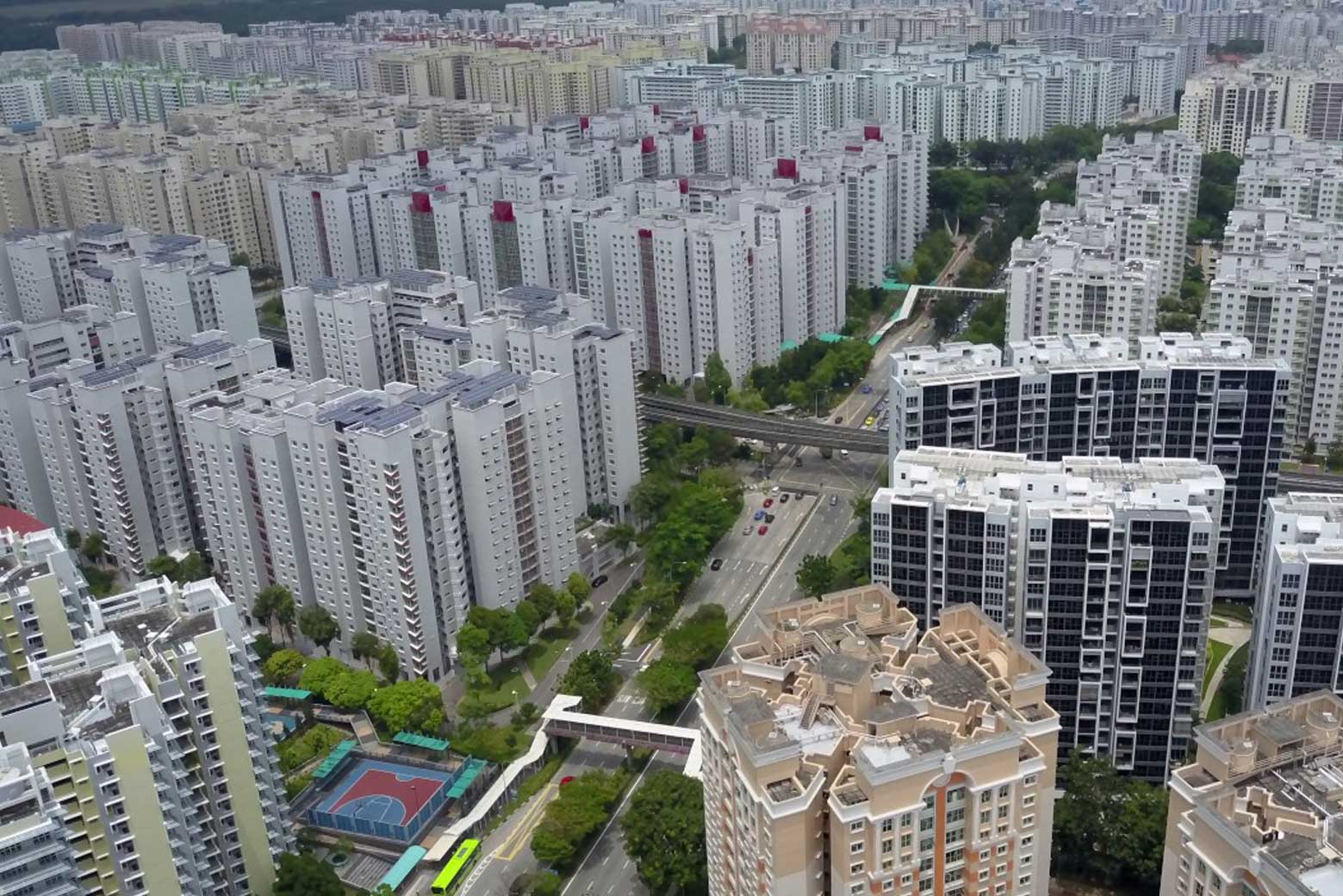 Education
Singapore’s emphasis on education partly reflects its virtual lack of natural resources and Singapore’s need to develop its human resource and manpower capability in its continuing quest to build a knowledge-based economy.

Education spending usually makes up about 20 percent of the annual national budget, which subsidises state education and government-assisted private education for Singaporean citizens.

Singapore’s education system is considered the best in the world. The country consistently ranks at the top of the OECD’s Programme for International Student Assessment (PISA), a triennial test of 15-year-olds in dozens of countries, in the main three categories of maths, reading and science.

Dropout rate
Singapore has a very low school dropout rate which lays under 1%. This is linked to Singapore’s fundamental ideology of meritocracy that aims to select people according to merit. A meritocratic society or social system gives people status or rewards because of what they achieve, rather than because of their wealth or social position. Having good academic credentials is seen as the most important factor for the students’ career prospects in the job market, and their future economic status. 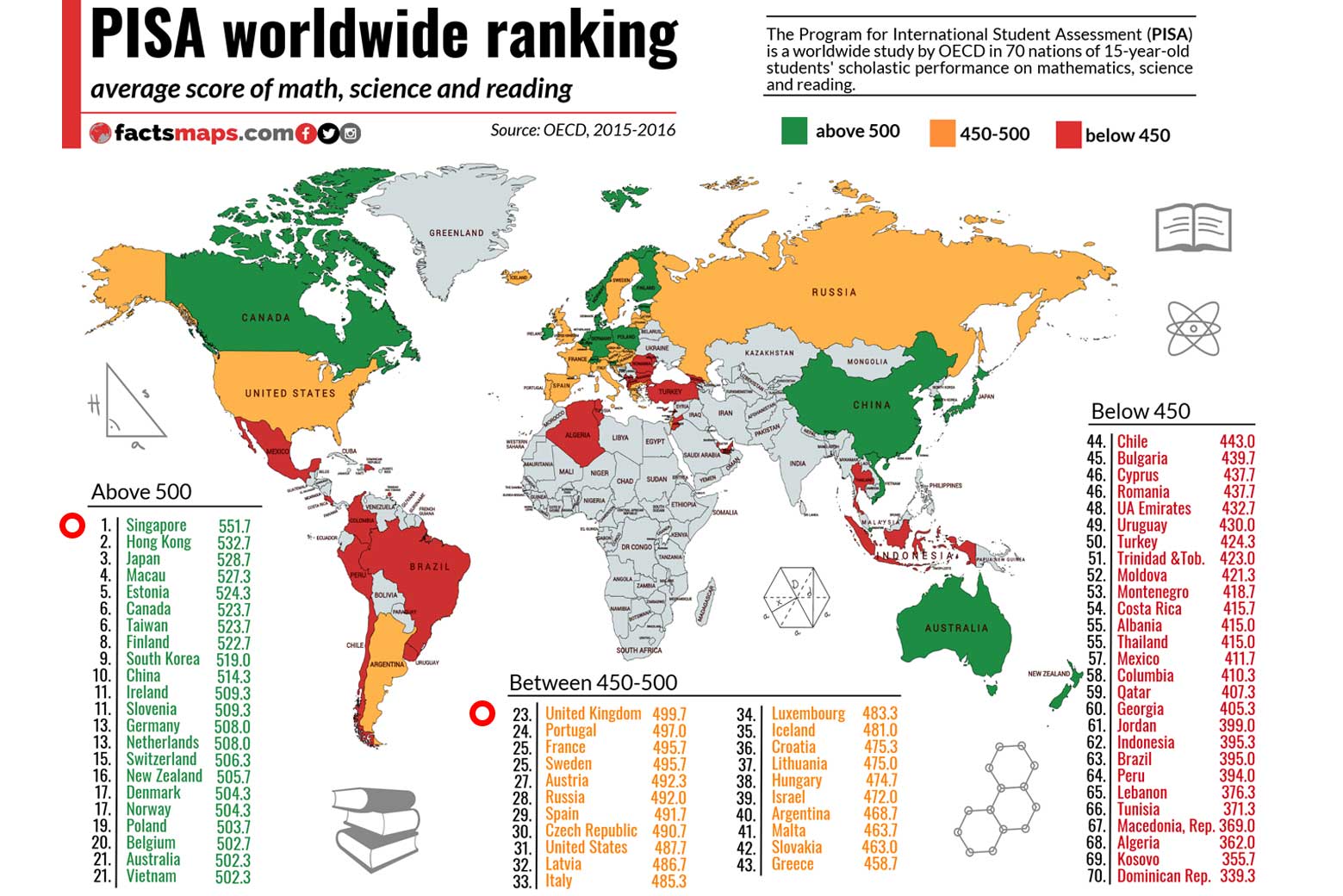 Healthcare
Healthcare in Singapore largely consists of a government-run universal healthcare system with a significant private healthcare sector. In addition, the financing of healthcare costs is done through a mixture of direct government subsidies, compulsory savings, national healthcare insurance, and cost sharing.

Medisave is a mandatory medical savings program that requires workers to contribute a percentage of their wages to a personal account, with a matching contribution from employers. These funds can be used for necessary medical services. Based on the amount of funds accumulated, the patient is able to choose the comfortable subsidy level when undergoing treatment: from the highest level when most of the medical expenses are covered by the Medisave savings to the lowest when patients are treated as private ones for their own funds.

MediShield is a low-cost catastrophic health insurance scheme to help policyholders meet the medical expenses from major or prolonged illnesses that their Medisave balance would not be sufficient to cover. It is designed for people no older than 85 years old. The Medishield (the same as the Medisave) doesn’t cover 100% of the needs but requires individuals to co-pay from their pockets.

Medifund is the government endowment fund set up to aid the poor. The fund covers citizens who have received treatment from a Medifund-approved institution and have difficulties affording their medical expenses. Medifund generally covers necessary medical treatment but the amount of aid is determined by the patient’s and the family’s income, the social circumstances of the patient, the medical condition, and treatment costs. 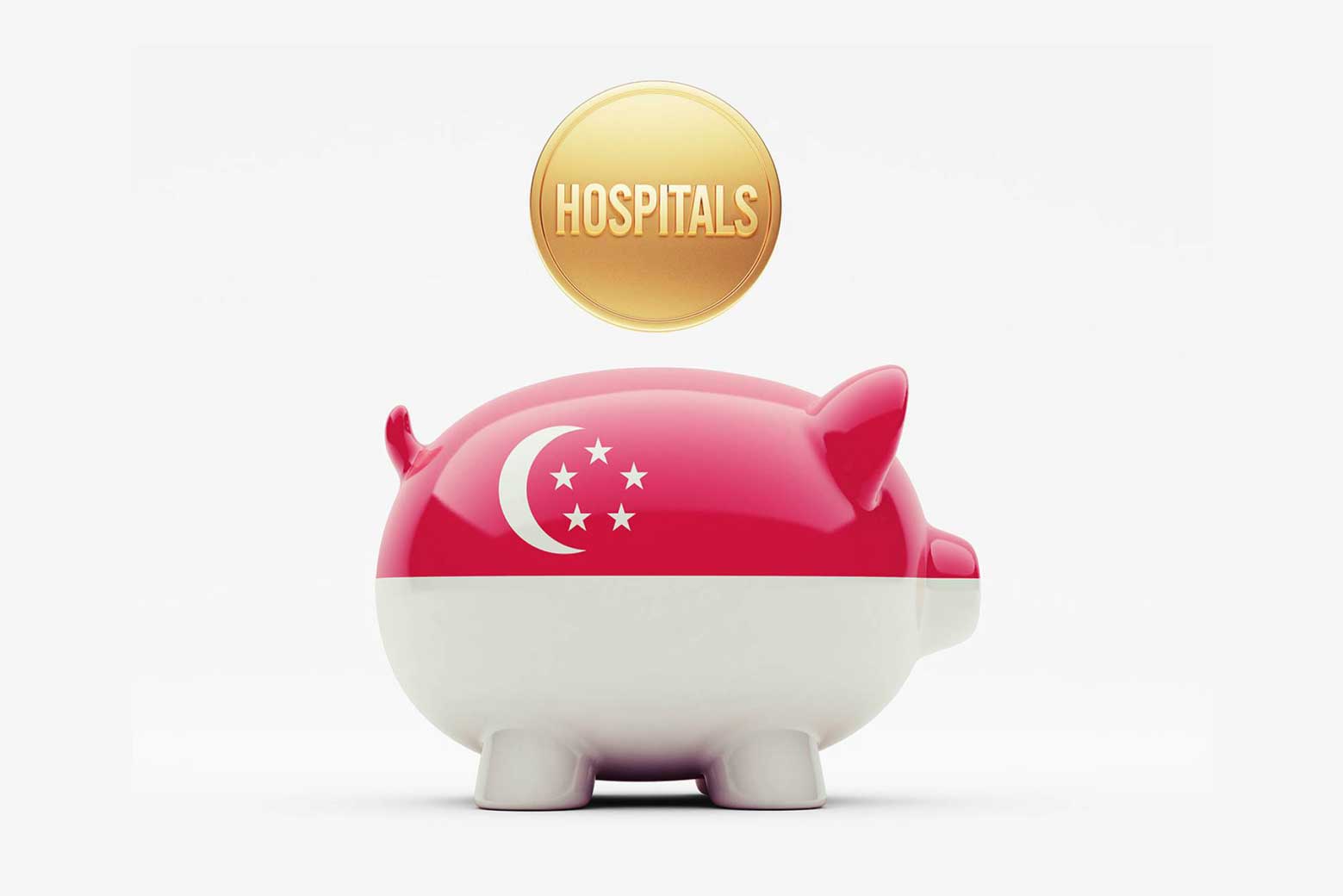 Housing/Homelessness
According to Singapore’s philosophy, people first have to exhaust all other means of accommodation such as seeking residence with a family member or a friend before asking help from the government and meet the tough requirements under the HDB’s public rental scheme.

People who fit the criteria are admissible to welfare homes which means “both care and detention”, as their residents do not get to decide when to leave the welfare homes unless they are granted special permission or can show that they are ready to be reintegrated into society.

Many homeless persons often have to resort to begging to earn an income and put themselves at the same time at risk of being perceived as a  “nuisance” in a public space penalised with a fine of $3,000 or imprisonment for up to 2 years. 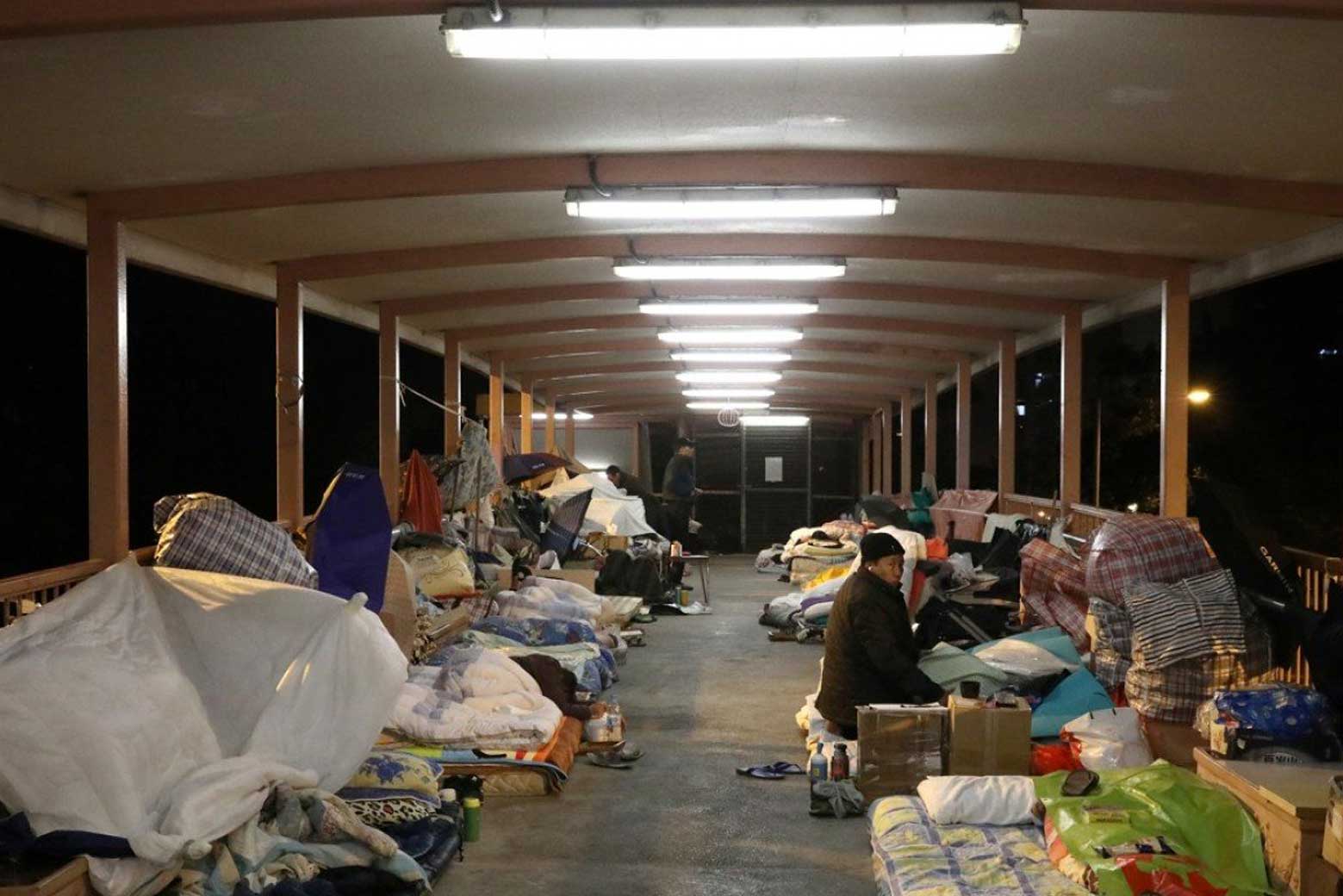 Social mobility
Singapore is among the top in the world when it comes to upward educational mobility with nearly six in 10 adults better educated than their parents.
The system placing a high emphasis on educational performance however leads to children experiencing high stress levels from primary school as a result of competitive pressure from schools and parents. 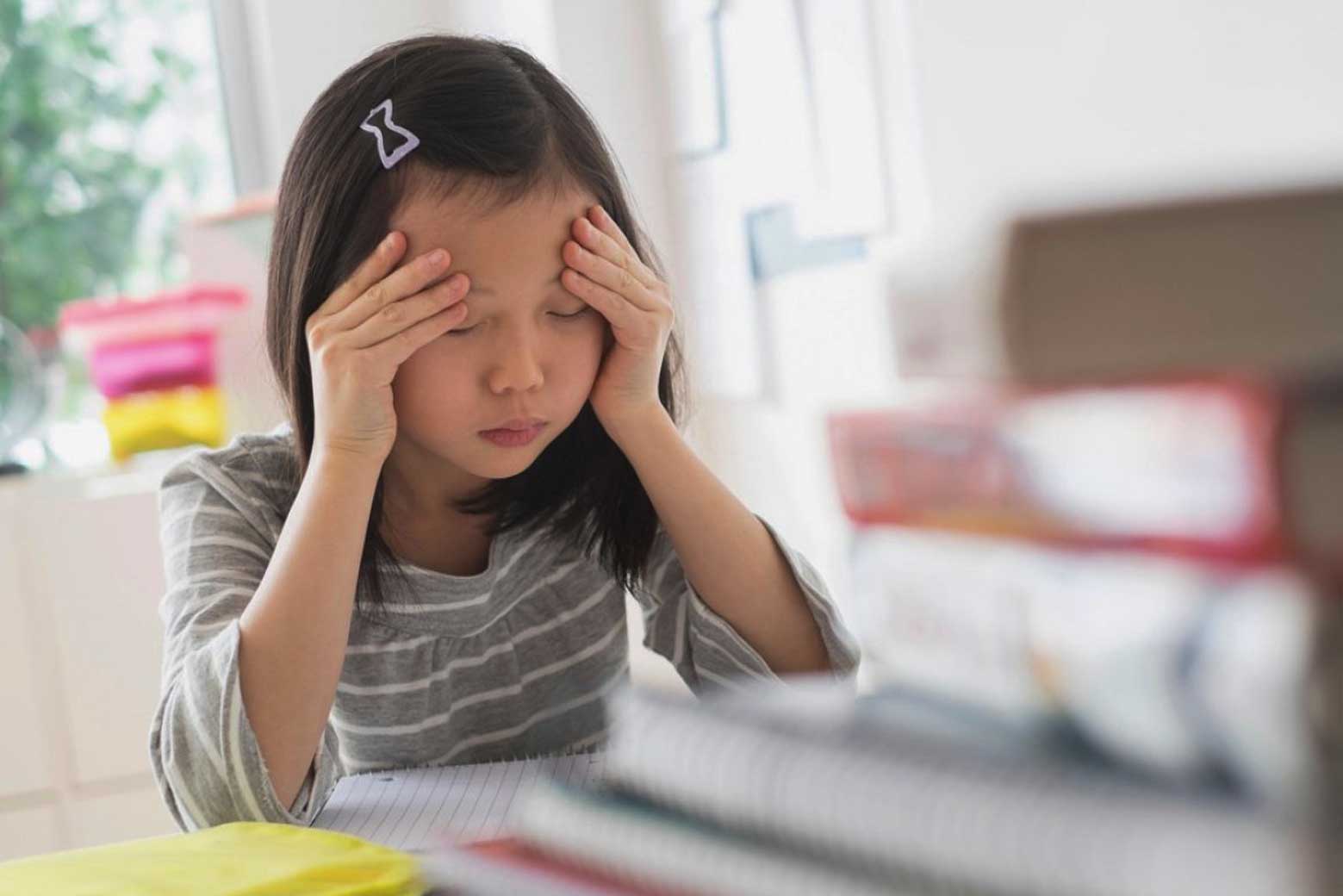 Community life and social relationships
The effect inequality has on trust is large in Singapore that has the second lowest level of trust where only less than 20% of the population believe that other people can’t be trusted. 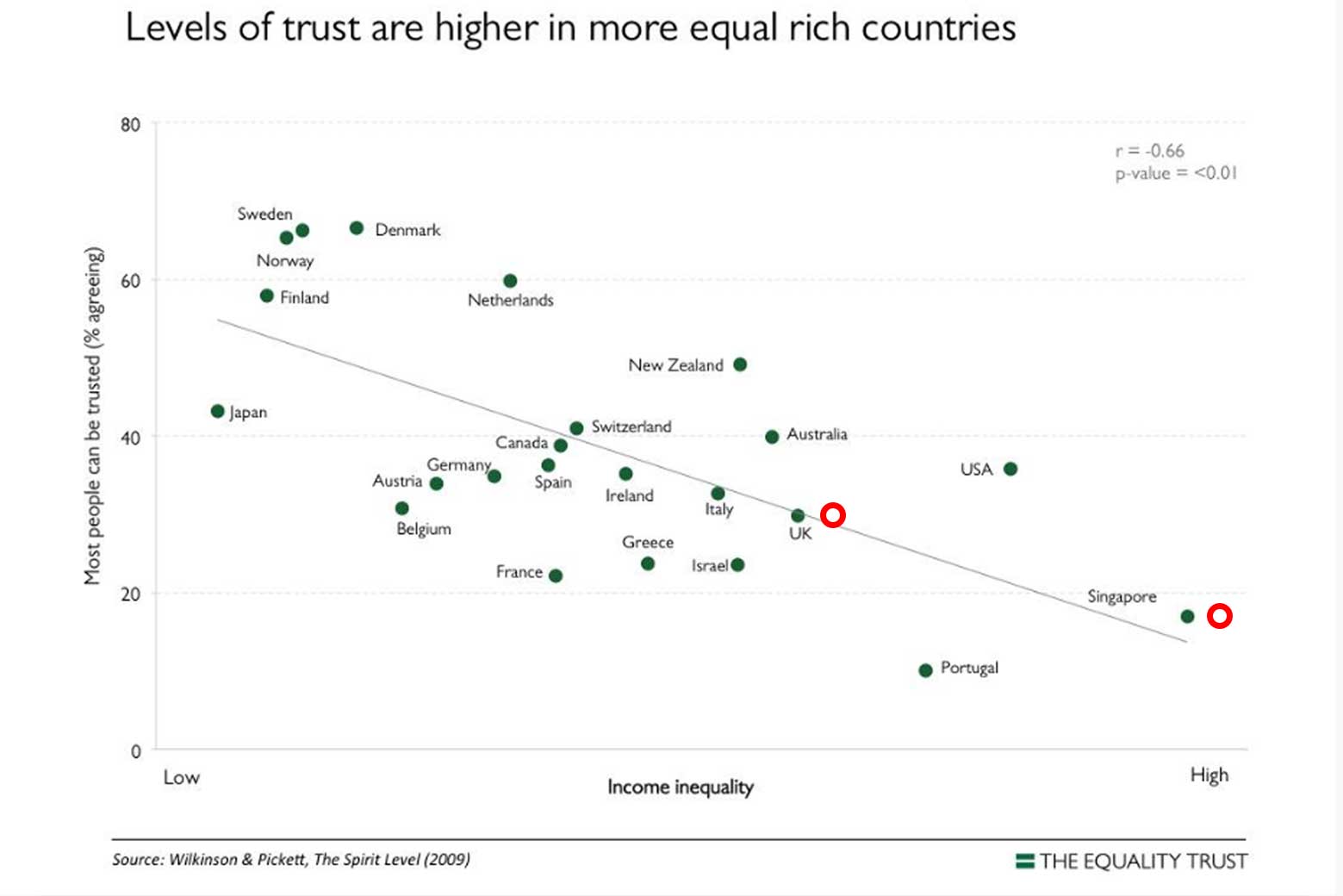 Mental health
The latest Singapore Mental Health Study found that about 14% of Singaporeans have experienced a mood, anxiety or alcohol-use disorder in their lifetime. The most common mental illnesses in Singapore are Major Depressive Disorder (MDD), Alcohol Abuse and Obsessive Compulsive Disorder (OCD). Compared to western countries like Australia, the United States and the UK, Singapore has fairly similar rates of MMD, bipolar disorder and suicide, but below-average rates of anxiety disorders.

Drug use
As far as harsh drug laws are concerned, Singapore has some of the toughest on the books. The country’s strict Misuse of Drugs Act punishes possession of even miniscule amounts of illegal drugs and prescribes execution if you’re found guilty of carrying large amounts of particular types of drugs. The prescribed penalties for possession of small amounts range from fines of up to $20,000 to a maximum of ten years in prison. 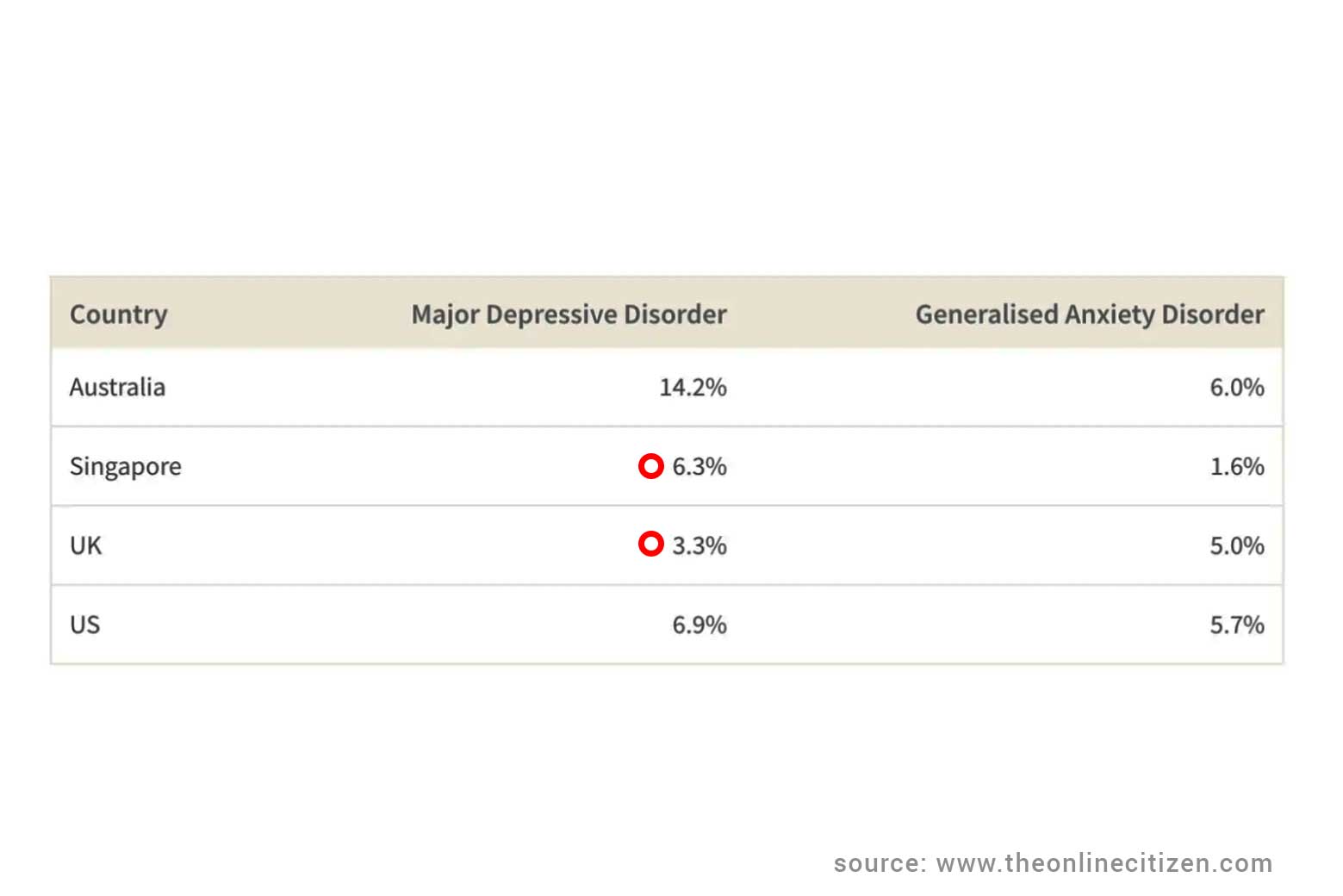 Obesity
Singapore has the second-highest overweight prevalence in the Association of Southeast Asian Nations (ASEAN) – at 32.8 percent, according to the World Health

Organization (WHO) with an upward trend in regards to children who are increasingly overweight.

Teenage pregnancy
The number of teenage girls getting pregnant in the past decade has dropped massively. This is the lowest in 25 years, going by checks the Immigration and Checkpoints Authority.

Life expectancy
People in Singapore are living longer than anyone else in the world, as a 2017 study showed. The expected life span in Singapore is 84.8 years but of that 10.6 years are spent in poor health. 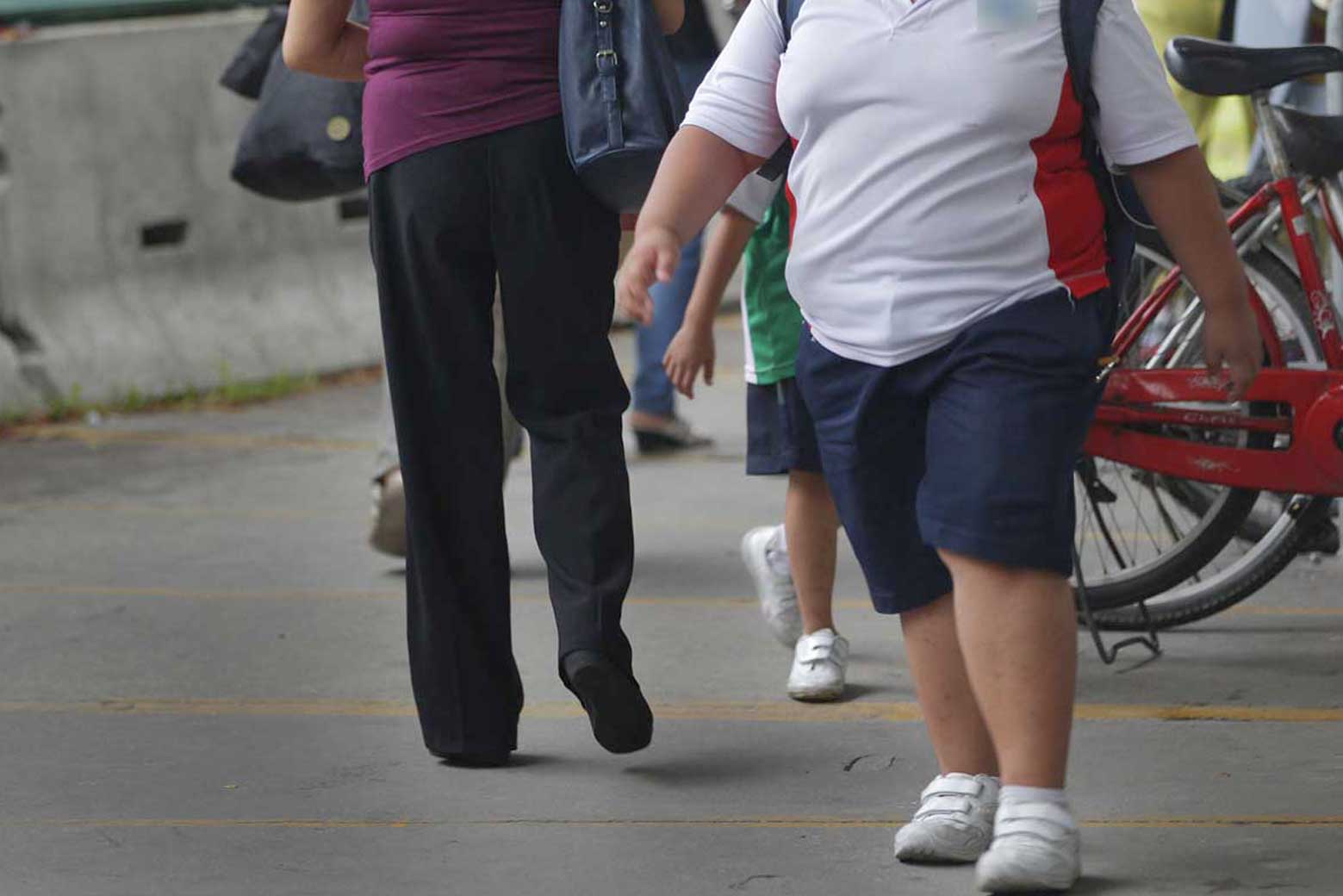 Violence
The following graph shows the relationship between income inequality and homicides per million. Singapore’s homicide rate is lower than expected, which might be related to its low rate of gun ownership which also explains why Finland stands out on this graph too (Finland has the highest proportion of households with guns). 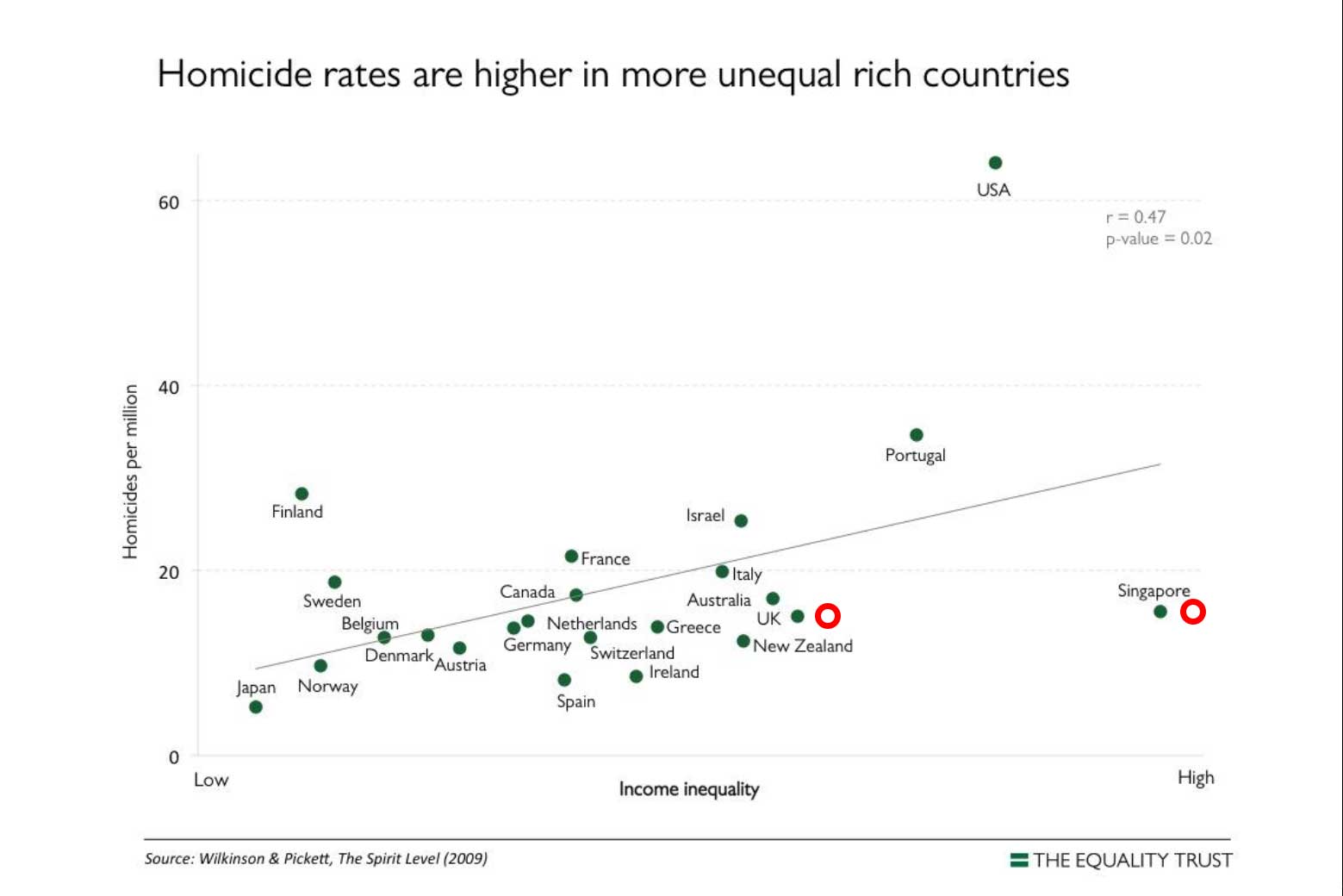 On the other hand, as this graph shows that the more unequal a country is, the more people are imprisoned. Singapore following the USA in this trend. 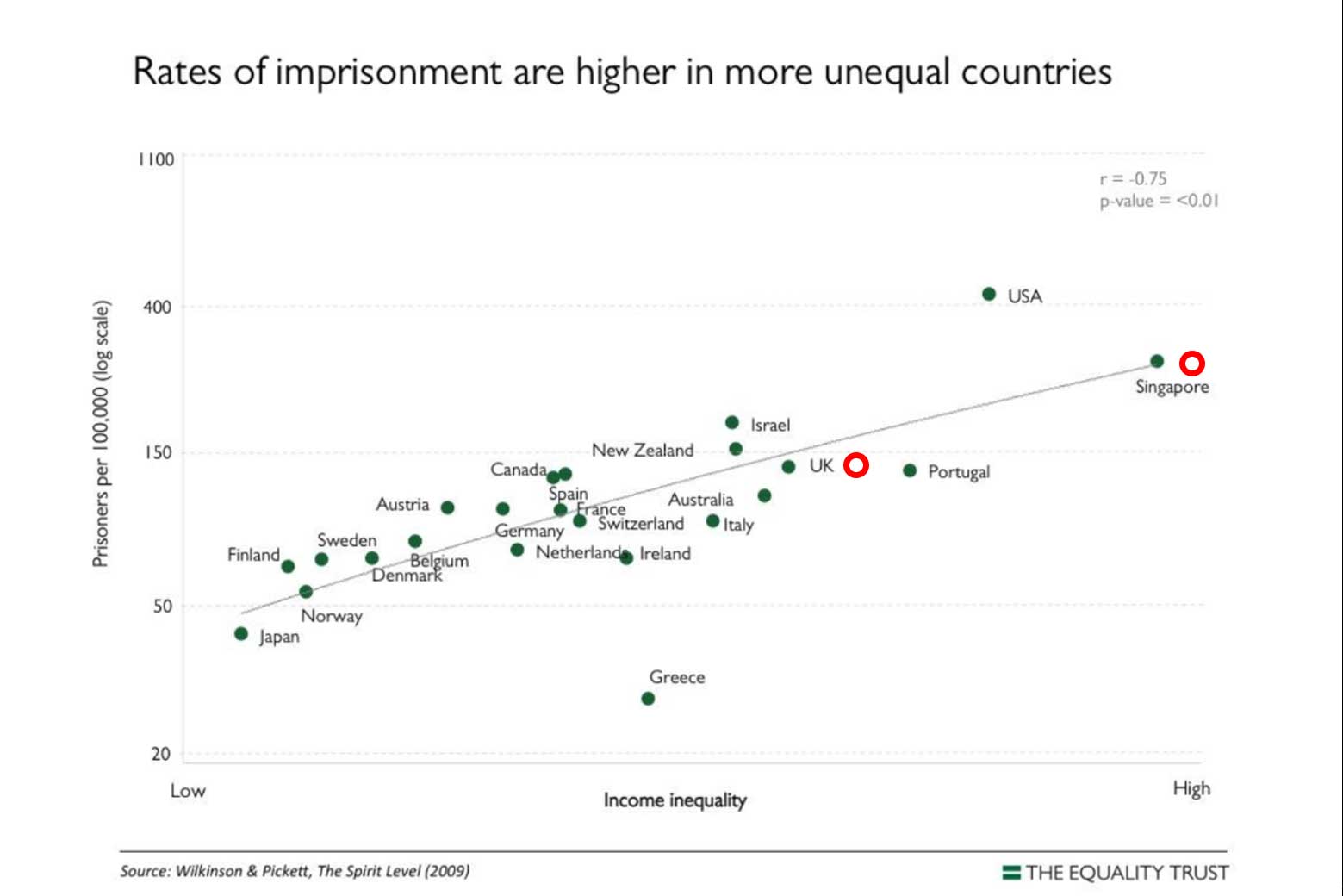 Waste production
Singapore generated 7.7 million tonnes of waste in 2018, equivalent to the weight of 530,000 double-decker buses. While this was a decrease of 9,000 tonnes from 2017, no headway was made on recycling.

Singapore has a habit of banning what it sees as undesirable behaviour and enforcing each ban with financial penalties.  Since the Keep Singapore Clean campaign, the authorities issued tens of thousands of fines a year for littering, the minimum fine being SG$300 (US$217).

Pollution
Singapore was ranked 16th with an air quality reading of 154, which falls in the “unhealthy” range on the World Air Quality Index’s list of countries with the worst air quality.

Cycling
A quarter of all households in Singapore own bicycles, with 125,000 (5.8 mil) people using them for their daily commutes. Under the National Cycling Plan, Singapore aims to increase its cycling network to more than 700km by 2030, with design features to increase shade along cycling paths. 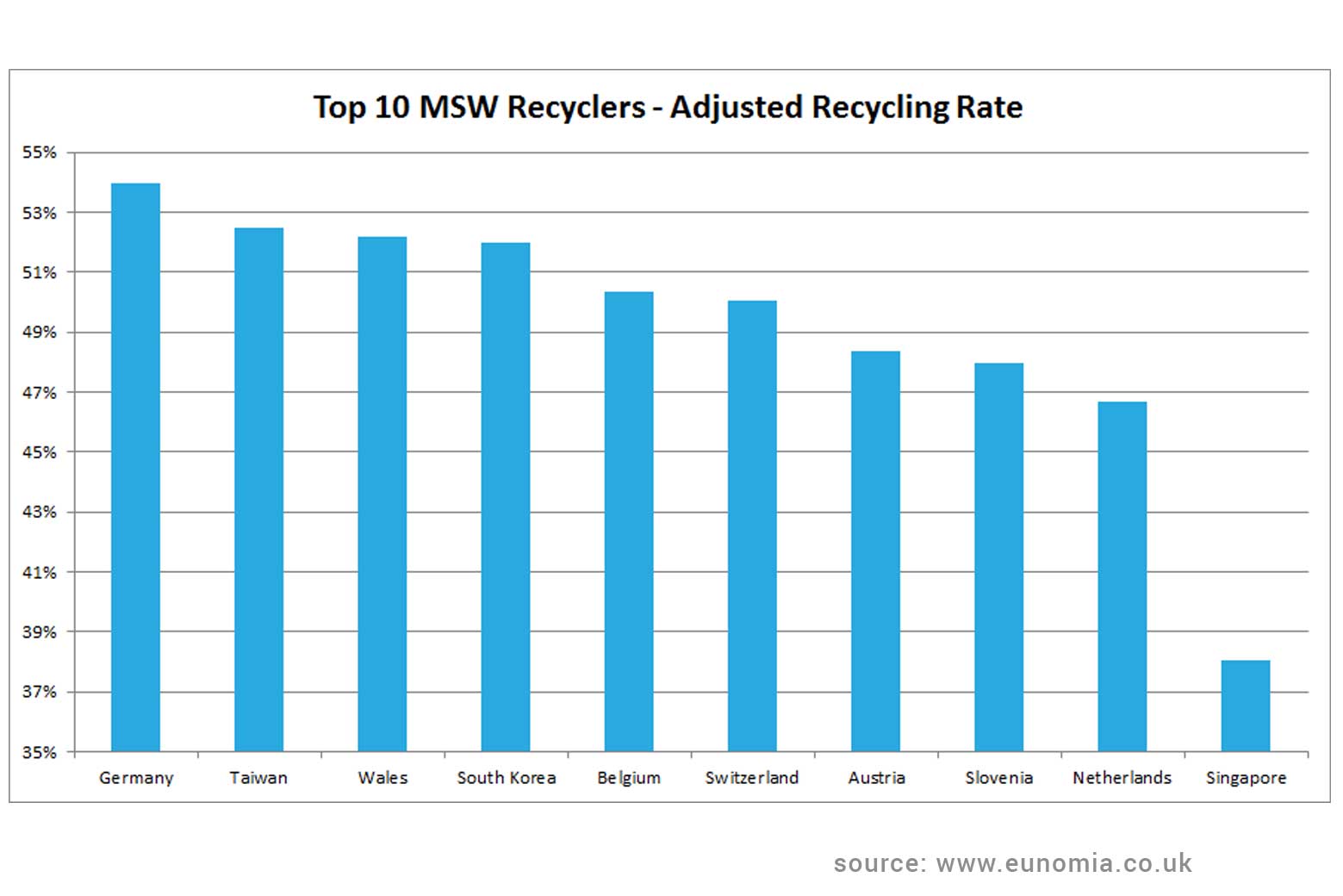 Deforestation
Since the founding of Singapore in 1819, more than 95% of its estimated 590 square km of vegetation has been cleared. At first for short-term cash crops and later because of urbanization and industrialization. 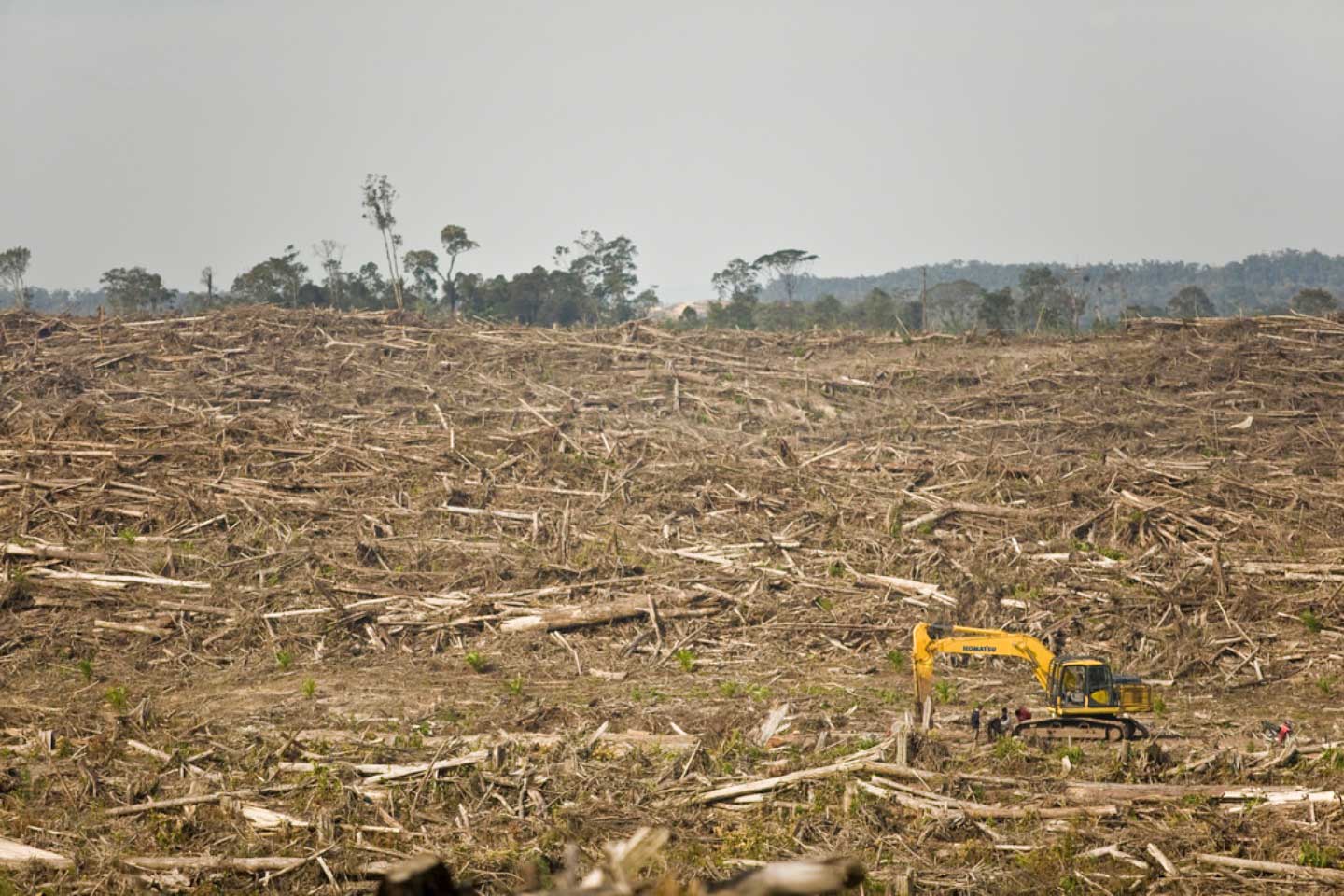